1. Thursday’s Rally: “Thursday: Opposition leaders had called for a day of mourning on Thursday, but some reports say it has been cancelled.”

2. Contrast to the Iranian Revolution – Weak Leadership in Karroubi: “Meanwhile, another opposition leader, Mahdi Karroubi, has put off a march of mourning for at least 17 people killed in post-election protests. The march had initially been set for Thursday but has been postponed for at least a week, according to a website linked to Karroubi, who was also a presidential candidate.”

3. Weak Leadership in Moussavi: “…Mr. Moussavi, the defeated candidate who embodied the hopes of reformers, posted a notice on his Web site of a late afternoon rally in front of the Parliament, but he distanced himself from the action, saying it was not organized by the reform movement. It is not clear how far Mr. Moussavi, a former prime minister who is essentially an insider thrust into the role of opposition, would go to defy the system. He has not been seen since Thursday. So as the crackdown infuriates protesters, there is a greater gap with their ostensible leader, political analysts said.”

4. iPouya on the Importance of Leadership: This is sharp contrast to the leadership of the Iranian Revolution. Khomeini was thrust into the political spotlight in 1963, when he led an uprising against the Shah. He was personally involved in the uprising and was consequently jailed for months and threatened with death.  When he was released, he immediately resumed his fiery sermons and was jailed again and later exiled where he continued his agitation until the revolution triumphed 14 years later. Compare his defiance, personal involvement, and stubborness to Mousavi and Karroubi’s internet statements, vacilation, and back peddling. Effective leadership is supremely important to any movement so forgive me for saying this, but today’s movement in Iran is lacking.

5. The beginning of the end… at least for now: “It’s beginning to look like the end of the line for the Mousavi opposition in Iran. From the million-plus demonstrators that choked Tehran’s streets a week ago, Tuesday saw only a handful of protesters brave enough to incur the wrath of police and paramilitary forces. This followed two days in which protest numbers dropped off considerably.”

6. MPs Snub Ahmadinejad’s Victory Party: “Nearly two thirds of MPs appear to have stayed away from President Mahmoud Ahmadinejad’s election victory party. All 290 MPs were invited to attend the party, Iran’s press reports, but only 105 turned up. …But the high number of MPs who stayed away is another indication that the disputed election has split the nation, says the BBC’s Jeremy Bowen in Tehran.”

7. Mujahideen the Opportunists: So Maryam Rajavi speaks (with a picture of Neda conveniently positioned behind her). Someone, anyone, QUICK, GIVE ME A SHOE TO THROW!!!

8. Who’s Really in Charge in Iran?: “What has been going on since 2005 is the shift of the center of power from the clergy to the Pasdaran,” or the Islamic Revolutionary Guards Corps, said a political analyst with years of experience in Iran who feared retribution if identified. “In a way one could say that Iran is no longer a theocracy, but a government headed by military chiefs.”

9. Grand Ayatollah Hossein Ali Montazeri Warns the Regime: “If Iranians cannot talk about their legitimate rights at peaceful gatherings and are instead suppressed, complexities will build up which could possibly uproot the foundations of the government, no matter how powerful,” Montazeri said in a statement to AFP. 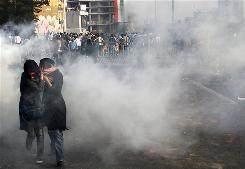 10. Women on the Frontlines: “Political protest is not new to Iranian women. Yet, the extent of their activism in this election is unprecedented in the years since the 1979 revolution overthrew the U.S.-backed shah and created an Islamic regime, some Iranians and Iran experts say. They cite several factors, including a growing population of young women who are hungry for social freedoms, the participation of prominent women during the campaign and promises by opposition candidates for advances in women’s rights.”

This entry was posted in 22 Khordad, Iran. Bookmark the permalink.