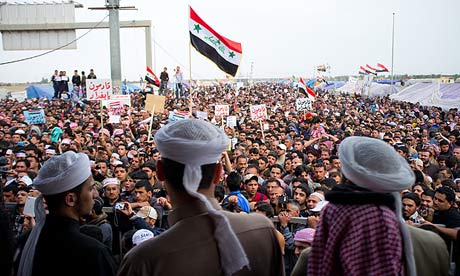 The Guardian: Abu Saleh sits in a striped tent pitched by the side of the highway joining Jordan and Syria with Iraq and reflects on the latest, improbable twist in his 10-year career fighting those he considers the enemies of his fellow Iraqi Sunnis.

A decade ago, when the Americans rolled into Ramadi in their tanks and Humvees, the former Saddam regime security officer led a group of Sunni fighters who took the fight to the occupiers with improvised explosive device (IEDs) and ambushes.

But Abu Saleh and his fellow fighters lost their way, he says. “We made mistakes. We took people randomly. Some of us resorted to kidnapping to fund the resistance, then it became an industry, detaining people inside their neighbourhood, planting IEDs in front of people houses.” He explains how the resistance fragmented into competing groups, how they began to fight each other and al-Qaida and how their neighbours eventually turned on them.

By 2009 they had been, in effect, run out of town by a local militia hunting them on behalf of the Americans. Like thousands of other Iraqi Sunnis, Abu Saleh took refuge in neighbouring Syria.

Now in his mid-30s, Abu Saleh is back in Ramadi, borne on a tide that sprung from the revolutions of Tahrir Square and Benghazi and gathered force amid the bloodshed in Syria. Abu Saleh and other Iraqi Sunnis believe it is a tide that could flow all the way to Baghdad, sweeping away the Shia government they despise.

Outside Abu Saleh’s tent, a familiar scene unfolds. Thousands of men line the highway standing in long, neat lines praying on coloured prayer mats placed on the ground, in effect blocking the main route linking Iraq to Jordan and Syria.

After prayers the men gather in front of a podium planted in the middle of the road and demonstrators catalogue a long list of grievances: corrupt and brutal security forces who detain them at will, draconian anti-terrorism and “de-ba’athification” laws that are tailored to target their community, thousand of their sons and fathers languishing in prisons for years.

The grievances are punctuated by anti-Shia rhetoric, accusing them of being Iran’s agents, and threats to march on Baghdad. “Baghdad is ours and we won’t give it back!” the crowd thunders in response to one rabid orator after another. Some demonstrators wave Saddam-era Iraqi flags as lines of heavily armed soldiers and riot police look on.

Similar scenes have been played out in several Sunni cities in recent weeks in the runup to the charged 10th anniversary of the US-led invasion. Every Friday, thousands of peaceful demonstrators have poured into the streets of Ramadi, Mosul and Falluja mimicking the Arab spring protests elsewhere in the region.

In Mosul and Falluja, tent cities have sprung up in public squares. Some have even demonstrated in Sunni areas of Baghdad, braving the draconian Friday security measures imposed on them.

But perhaps more remarkable is the scene inside the tent. Among the tribal sheikhs and activists around Abu Saleh are former enemies and victims, men who feared him and men who hunted him on behalf of the Americans. Sensing an opportunity, Sunni factions have put aside their differences to mount a common front against Baghdad.

Abu Saleh, rotund and balding, explains how a week after the first demonstrations in Sunni cities, he and other fighters commanding the remnants of Sunni insurgent groups held a series of meetings to form a pact and use the momentum in Sunni cities.

“Call us the honourable nationalistic factions – people here are still sensitive to using words like mujahideen or resistance. We decided to sign a truce with the tribal sheikhs, other factions and even moderate elements in al-Qaida,” he said.

“The Sunnis were never united like this from the fall of Baghdad until now. This is a new stage we are going through: first came the American occupation, then the resistance, then al-Qaida dominated us, and then came internal fighting and the awakening … now there is a truce even with the tribal sheikhs who fought and killed our cousins and brothers.

“The politicians have joined us and we have the legitimacy of the street. To be honest, we had reached a point when people hated us, only your brother would support you.”

One of the things that transformed the reputation of men such as Abu Saleh in the eyes of their fellow Sunnis has been their involvement in the Syrian conflict, a few hundred miles west along the highway.

The conflict pitted Sunni rebels against government forces and Alawites, backed by Iran, also patrons of Iraq’s Shia leadership. Weapons flowed to the rebels from the Iraqi tribes – sold for a comfortable profit – while the Iraqi Shia prime minister toed the Iranian line and lent his support to the Syrian regime. With both sides using the same sectarian rhetoric, it was easy to join the dots between the two conflicts.

Abu Saleh found himself fighting his old war in a new field. He lent a hand to the novice Syrian rebels and joined the fight, commanding a unit of his own operating in the city of Aleppo and the countryside north of it.

“We taught them how to cook phosphate and make IEDs. Our struggle here is the same is in Syria. If Syria falls, we are liberated; if we are liberated, Syria will be liberated. We have the same battle with Iran – by defeating them we break the Shia crescent of Iran, Syria and Lebanon.”

Abu Saleh claims that once he and his men had been accepted back in Ramadi, they formed three battalions that had hit convoys carrying supplies to Syria as well as an Iraqi army helicopter.

In another echo of recent Arab uprisings, Abu Saleh says he and other Sunni leaders have now secured support from wealthy Gulf state figures who funded them during the early years of their insurgency against the Americans.

After the truce between Sunni groups, he says, a meeting was set up in the Jordanian capital, Amman, between a united front of Iraqi factions and representatives of “charities” from the Gulf.

The Iraqis asked for money and weapons; after a decade of war their arsenals were almost depleted. What didn’t get destroyed by US or Iraqi forces was sold to the Syrians. They needed money to train and recruit new fighters but more importantly a religious sanction from the religious authorities for a new round of fighting.

The Gulf figures asked for more time and a second meeting was held in Amman, this time attended by a higher-ranking group of officials from the both sides. The answer was yes: the “charities” would offer support as long as the Iraqi Sunnis were united and used their weapons only after Iraqi government units used force against them. Another Sunni leader confirmed to the Guardian that the Amman meetings had taken place.

“There is a new plan, a grand plan not like the last time when we worked individually,” another commander told me. “This time we are organised. We have co-ordinated with countries like Qatar and Saudi and Jordan. We are organising, training and equipping ourselves but we will start peacefully until the right moment arrives. We won’t be making the same mistakes. Baghdad will be destroyed this time.”

This entry was posted in Arab Spring, Iran, Iraq, Syria. Bookmark the permalink.